“In the late 1970s and early 1980s, booming economic conditions in the lush Flathead Valley induced indiscriminate development and hodgepodge planning that chopped up the area. These practices caused alarm among both individuals and groups such as the Flathead Conservation District, which wanted to preserve prime agricultural farmland.

At the same time, the three forks of the Flathead River were incorporated into the National Wild and Scenic River system, and the Flathead National Forest launched a project to obtain in fee or through easements a corridor along these rivers for the protection of the resource.

These two simultaneous events aroused an interest in conservation easements as a land protection tool for the valley, especially for farmland where owners were wary of the harshness they saw in zoning, but wanted to do something to save agricultural lands.

Common interests eventually dovetailed efforts and the Trust for Public Land was contacted to consult with interested community members as to the options available. Once a core working group determined that a local land trust was the best viable option, a framework was established along with a board of directors and the Flathead Land Trust was born.”
— Excerpt from 1988 article by Jo Ann Speelman

The Flathead Land Trust’s first project, a cooperative effort with Trust for Public Land, was the purchase and transfer of a 460-acre farm near the north shore of Flathead Lake to the U.S. Fish and Wildlife Service which became the Blasdel Waterfowl Production Area. The protected land also includes the historic Blasdel Barn – one of the most photographed and iconic barns in the Valley.

The Flathead Land Trust has come a long ways since those early days
We now hold 60 easements and have protected over 14,000 acres across the Flathead Valley and northwest Montana. In 2013, we received our accreditation status by the national Land Trust Accreditation Commission. After an extensive, rigorous evaluation, Flathead Land Trust became one of 230 land trusts of 1,700 land trusts in the nation to receive the recognition showing that we meet national standards of excellence for land trusts and land conservation. 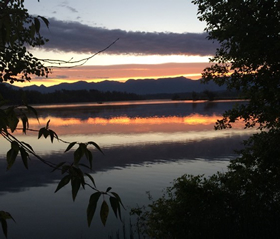