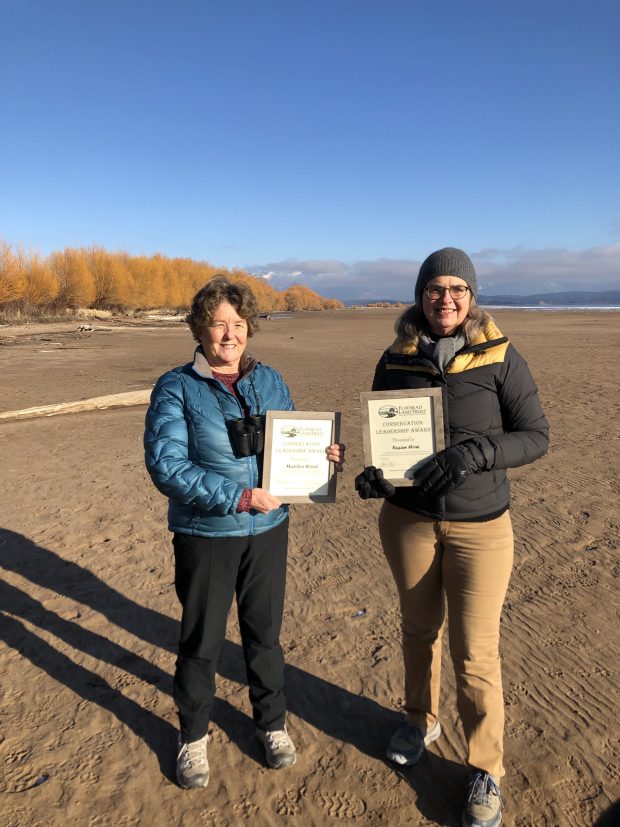 Both Marilyn and Susan ushered in new eras of conservation during their tenures at the helm of Flathead Land Trust.  They were not only dedicated to the conservation of important land and water resources in the Flathead, they also were able to build the reputation of Flathead Land Trust as an effective and respected community-based conservation organization.  “They worked tirelessly to ensure we all have the opportunity to continue to enjoy so many of our beloved open spaces and wild places throughout northwest Montana, from the north shore of Flathead Lake to the North Fork of the Flathead.  Their leadership, ingenuity, persistence and optimism helped make the organization and conservation in the Valley what it is today and I am grateful for the trails they blazed and honored to continue in their footsteps.” said Paul Travis, executive director of FLT.

Here’s more about each award recipient:

Marilyn grew up in Nevada riding horses and developing a love of the outdoors. After receiving her Bachelors in Biology at the University of Nevada – Reno, she came to Montana and earned a master’s degree at Montana State University studying impacts to the ecology of Yellowstone National Park from wildfires.

In 1983 she began work for Montana Fish, Wildlife and Parks as a wildlife biologist documenting habitat loss due to impacts from hydroelectric facilities in NW Montana. She and her team helped to develop conservation plans to mitigate these wildlife impacts on over 17,000 acres on both public and private lands.

After her work at FWP, she also worked as a Program Manager for the Nature Conservancy where she negotiated over 30 priority conservation projects in the nineties and early 2000’s.  This was a time when land trusts and conservation easements were not as well-known, at least in Montana.  Probably one of the most important easements is the Ladenburg property or Rocky Bar O Ranch in the North Fork of the Flathead.  That beautiful property which everyone passes through while traveling up the North Fork Road on their way to Polebridge is over 1100 acres of incredible habitat for grizzly bears, wolves and other critters.  And it has some of the best winter elk habitat in the North Fork.  At the time, it also had development potential.  The Nature Conservancy easement which adjoins USFS Wild and Scenic Easements already in place on Ladenburg’s property was critical at an important time for the North Fork and the Flathead region as development was really picking up steam.  Even though Tom Ladenburg was a fairly outspoken critic of wilderness and government regulation, Marilyn was able to work her magic and negotiate a permanent conservation easement because of a shared love of the land and the wildlife that use it.   From what I hear from so many that worked with her, be it a landowner or project partner, she had a special way with people which was incredibly effective.  Significant projects like Rocky Bar O have encouraged others in the North Fork and beyond to consider conserving their own land which continues to this day.

In August, 2005 Marilyn began working for Flathead Land Trust as the Stewardship Director and was then hired as the executive director in May 2007.  Marilyn led the organization as ED until June, 2013.

Along with many significant conservation easements that were inked during her leadership at the organization, probably one of her biggest achievements was getting the Flathead River to Lake Initiative started in the mid 2000’s.

Gael Bissell, who received the FLT Conservation Leadership award in 2019 shared these thoughts about Marilyn:

At The Nature Conservancy, Marilyn spearheaded significant private land conservation in the North Fork, Flathead, and Swan Valleys. She worked with many landowners to achieve significant conservation such as with the Laddenberg family near Polebridge and Blankenships in the Middle Fork.

Around 2006, Susan How, Marilyn, Robin Steinkraus, and Constanza helped pull together a core group to develop FLT’s Habitat Strategic Plan. We had the benefit of all the work of Constanza on Critical Lands in place. At that meeting, we talked about a conservation strategy along the mainstem of the Flathead River from Columbia Falls to the north shore of Flathead Lake…. it was Marilyn who said, “let’s call this the Flathead River to Lake Initiative”.  That was the moment the River to Lake initiative was born.

I would say the collaboration that followed, first under Susan How’s leadership and then Marilyn’s at FLT, motivated and encouraged outrageously complicated and convoluted new funding strategies that brought millions of dollars to Flathead Valley farmers for private land conservation easements.

Through her committed work while at FLT, and in the years since, Marilyn has worked her “magic” to get important conservation efforts moving forward which have found a large amount of success.  Many of the richest, most vibrant wild places of northwestern Montana are conserved in perpetuity because of her rare mix of biological knowledge, skills at relating to just about anyone, and determined optimism.  For that, we owe Marilyn a huge debt of gratitude.

Susan grew up in a farming family as a fourth generation Nebraskan.  She went on to graduate with a BS from the University of Nebraska-Lincoln and then received an MS. in biology (ecology) from Bucknell University, Lewisburg, PA. Her graduate research focused on the interactions of goldenrod and the gall-forming fly whose larvae inhabit the galls.  Her research, she said “Doesn’t lend itself to sparkling conservation, but it changed my entire outlook on the world around me. All living things are bound up together in a tremendous process that we have only the smallest notion about.  It is essential to every creature’s well-being, including ourselves, that we carefully consider our actions in the landscape”.  She also worked for almost a decade as an agricultural editor and free-lance writer of “The Land”, a Minnesota agricultural publication.

Susan came to the Flathead Valley with her family in the 1990’s and served as Flathead County extension agent. She was hired as the executive director for the Flathead Land Trust in January, 1998 and led the organization until May, 2003.  As sole employee for most of the period, she built the organization from assets of less than $20,000 to over $200,000 and developed conservation projects valued at more than $3 million.  She also was responsible for negotiating and inking some of the first large agricultural easements in the Flathead Valley.

In addition to Flathead Land Trust, Susan has given back to this community and its landscape in many ways including as a member The Glacier Institute board of directors, co-founder and advisor to Project FREEFLOW, a water-quality stream monitoring program for students K-12, Montana Conservation Voters Education Fund, and much more.   She currently works as a conservation consultant – advising non-profit organizations on land and watershed conservation strategies, and is owner of Sunrift Media, LLC – Free-lance writing and photography

Bill Dakin, who served on the FLT board during Susan’s time and  is a past recipient of the FLT Leadership Award, shared these thoughts about Susan:

Susan How is one of the parents of the Flathead Land Trust.  She was our first (poorly) paid Executive Director. When she came, the organization was in its adolescence, and she guided us up to young adulthood.   Fortunately for us, Susan’s conception of “part time” was very liberal.  She donated uncountable hours because our resources were so small.

Her great achievement as E.D. was to utilize her talents, determination, and her character to give the young organization credibility.  Credibility — not only with some foundations to provide seed money, — but with project funding sources that are always initially wary of an applicants’ legitimacy and commitment.

They learned, working with Susan, that we were legitimate, and committed, and that projects we proposed were of high merit for conservation funding.  They learned that we would tirelessly see projects finished.   Today we are fully accredited and broadly admired for getting visionary things accomplished.   A huge reason for that is because of Susan How’s dedication and influence in her (until now) under-appreciated stint as one of our brightest guiding lights.

Partnering with Park Side

Posted On April 18, 2018 ~ 0 Comments
We are so excited to have been chosen to participate in the Park Side Partner Program this year along with two other great organizations in…

Posted On May 11, 2016 ~ 0 Comments
May 10, 2016 – Flathead Land Trust, in partnership with the Darrow family, permanently protected the Darrow family’s Paladin Farm near Bigfork with a conservation easement…