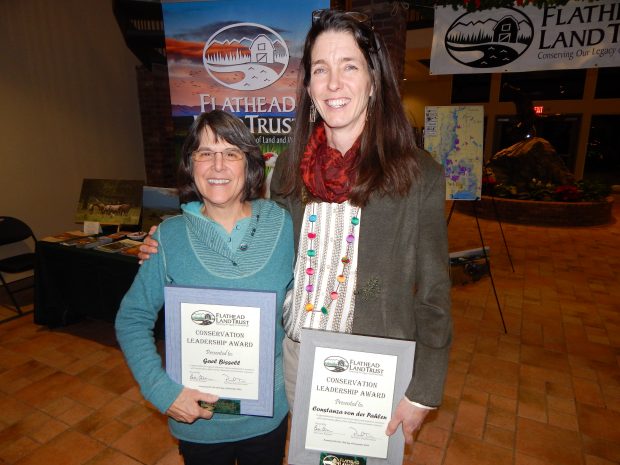 On December 12th at the Flathead Land Trust holiday and member appreciation party, Gael Bissell and Constanza von der Pahlen were each recognized for their many years of dedicated work and significant achievements in protecting our land and water throughout NW Montana with the 2019 Conservation Leadership Award.

“We can’t think of two more deserving people to receive the award this year and are very grateful for their unwavering leadership, service and commitment to conserving our spectacular land and water legacy through community-based conservation”, said Paul Travis, Flathead Land Trust executive director.

Originally from Wilmington, Delaware, Gael graduated with a zoology degree from Ohio Wesleyan University.  She then received her Master’s degree in environmental studies from the University of Montana.  After a short period working as a lobbyist for Montana Audubon and as an environmental consultant, she landed her first position with Montana Fish, Wildlife and Parks in 1984 writing mitigation plans for hydropower dams in northwestern Montana. Gael’s significant accomplishments at FWP continued as a lead habitat conservation biologist, which combined duties under both mitigation and management programs. She put in 31 years with the state agency before retiring in 2015.  All told, Gael was able to directly fund more than 130 projects scattered throughout the region, totaling more than 24,000 acres. She was also the driving force to secure conservation easements on about 200,000 acres surrounding the Thompson and Fisher rivers, giving the public access, hunting and fishing rights on most of those lands.

In the early 90’s she also helped develop the state’s loon conservation program which has since made a significant comeback as a recovering species.

Since retirement, she’s managed to stay almost as busy.  She worked for the Vital Ground Foundation for several years focusing on conservation of critical grizzly bear habitat.  She is a board member and the current President of Flathead Audubon where she continues to use her “magic” in making collaborative conservation and environmental education possible.  Plus, I’m guessing many other things that I’m missing here.  With her husband, Rick Mace (another recently retired wildlife professional with FWP, and FLT board member) Gael also spends time traveling and enjoying everything the outdoors of NW Montana has to offer.

One of Gael’s biggest strengths has always been her leadership and ability to work with people and organizations in such a creative and collaborative way. This certainly has led to greater conservation gains for the greater good.  Founder of the Flathead River-to-Lake Initiative, which in 17 years has protected more than 5,700 acres of wetland and riparian habitat and farmland along the main stem of the Flathead River, serves as a large example of Gael’s impact.

Through the River to Lake Initiative and other conservation projects, FLT has worked extensively with Gael over the years. From the North Shore of Flathead Lake Wildlife Management Area to other critical bird and wildlife habitat projects across NW Montana, there are far too many to list here.  But, probably more importantly, we recognize her as she has set a very high bar for what is possible with her unique ability to get complex and challenging conservation projects completed. She has paid it forward as a “conservation hero” to many of us, serving as an example of how to effectively make meaningful conservation possible. It’s a testament to her perseverance, commitment to conservation, forward-thinking and creative approach, infectious optimism and love of working with all kinds of people.

Constanza grew up in Argentina and Italy, and came to the U.S. to study in 1989. She earned a bachelor’s degree in biology and psychology at Wheaton College in Massachusetts and a masters in environmental studies at Yale School of Forestry.  She worked in Brazil on community development and resource protection before returning to the U.S.  She then worked for The Nature Conservancy helping identify critical areas in western Massachusetts before moving to Montana in 2000.

Much can be said about Constanza’s skills and leadership when we talk about her work as coordinator for the Flathead River to Lake Initiative as well as her other work with the Lakers.  She’s a consistent and thoughtful leader; always pushing us as a collaborative group (which consists of many partner organizations and agencies) so we can continually improve upon our work together.  The River to Lake Initiative is a model of what a collaborative group can achieve and Constanza deserves a lot of the credit for its effectiveness.

But for this award, we focus our recognition on Constanza as an incredible partner.  She has gone “above and beyond” time and time again for Flathead Land Trust and our shared efforts with the River to Lake Initiative.  We especially recognize her for her help in raising a substantial part of the matching funding needed for the Flathead River Conservation Project.  In terms of events and outreach, she has always been a critical help in the coordination and planning making them educational, fun and financially successful.

This year, Constanza and the Lakers really stepped up in a big way to co-host the Summer Solstice Party with Flathead Land Trust in June where over $15,000 was raised for the project. Then, Constanza and the organization didn’t bat an eye as they offered more help with a direct mail appeal to their members – which brought in an astonishing $30,000.  Constanza helped coordinate two house parties hosted by Lakers board members which brought in another $18,000 for the project.  Because of Constanza’s efforts and the robust support of the Flathead Lakers, all of this broadened our audience and helped heighten awareness by showing that conserving this property mattered not only to save exceptional wildlife habitat, open farmland, and open space, but also to help sustain our clean water in Flathead Lake.  For that, we are grateful for all your hard work, effectiveness, and solid partnership to make this meaningful and important conservation project possible.

Posted On November 9, 2020 ~ 0 Comments
We're so proud to bring you our latest ViewPoints newsletter!  Check out the full issue HERE. The issue includes a full story about the Bad…

Posted On August 2, 2021 ~ 0 Comments
Get ready to Give Together and make an Impact for the Flathead Valley!  The Great Fish Community Challenge officially begins on August 5th and runs through…