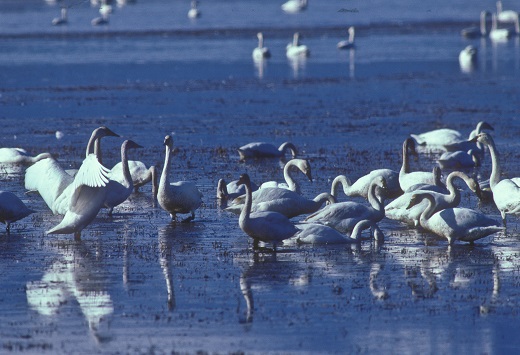 Linda and David Kurfess, in partnership with Flathead Land Trust, permanently protected 45-acres of their property along the north shore of Flathead Lake and adjacent to the US Fish and Wildlife Service Flathead Lake Waterfowl Production Area.  The property is especially important for birds during their migration with its seasonal open shallow water habitat. The property is important for hundreds of northern pintail, mallards, American widgeon, northern shoveler, and Canada geese as well as dozens of tundra swans.

The Kurfess conservation easement helps secure habitat and open land on the north shore which is critical to tens of thousands of waterfowl and shorebirds on their migration each year and 229 species of birds throughout the year. The project helps protect a rare gem unmatched anywhere else in the western United States. The north shore includes seven miles of largely undeveloped shoreline on Flathead Lake, the largest freshwater lake west of the Mississippi River and one of the cleanest lakes in the world because it is fed by the Flathead River with headwaters in Glacier National Park and the Bob Marshall Wilderness complex.

The Kurfess conservation easement continues the implementation of a shared conservation vision by Flathead Land Trust and its partners to protect the important landscape on the north shore of Flathead Lake as well as critical lands along the Flathead River. This collaborative effort called the Flathead River to Lake Initiative includes private landowners, land trusts, conservation organizations, and county, tribal, state and federal agencies working together. With the completion of the Kurfess project, this effective partnership has protected 542 acres on the north shore adding to over 2,000 acres of land previously conserved by the Flathead Lake Waterfowl Production Area administered by the U.S. Fish and Wildlife Service and by private landowners with conservation easements. The River to Lake Initiative has also helped conserve over 5,000 acres along the Flathead River adding to a network totaling over 8,000 acres of protected public and private lands along the river. 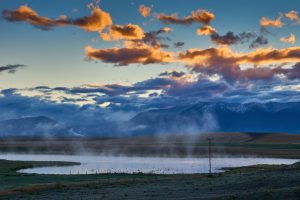 Also in May, Flathead Land Trust  completed the final of three conservation easements which permanently protects a total of almost 400 acres of wetlands and surrounding farmland of the West Valley Wetlands.  The conservation easement protects habitat that is vital to over 150 species of birds and especially to sandhill cranes, as well as scenic open space and productive farmland in perpetuity.

Under the conservation easement, the land will remain in private ownership managed by the landowner. However, as part of the project, the Grosswiler and Marvin families have generously allowed for a bird viewing area to be created for the public overlooking the unique pothole wetland and roosting area for sandhill cranes. The bird viewing area will be constructed this summer in cooperation with Montana Fish, Wildlife and Parks and open to the public next fall in time to view the sandhill cranes. It will serve as an educational site for local schools and other educational programs.  This incredible project wouldn’t have been possible if we hadn’t received such a huge outpouring of support from this community.  We are beyond grateful and it’s so exciting to know that this ecological and community treasure will continue to be here for so many generations of people and birds to come.

Posted On October 4, 2021 ~ 0 Comments
September 9th, 2021 - We are so excited to announce that Flathead Land Trust is working with The Trust for Public Land and Montana Land…

Posted On April 13, 2020 ~ 0 Comments
April 7, 2020 -  Flathead Land Trust closed on a 26-acre conservation easement last week on Wileys Slough in the lower valley which was generously…