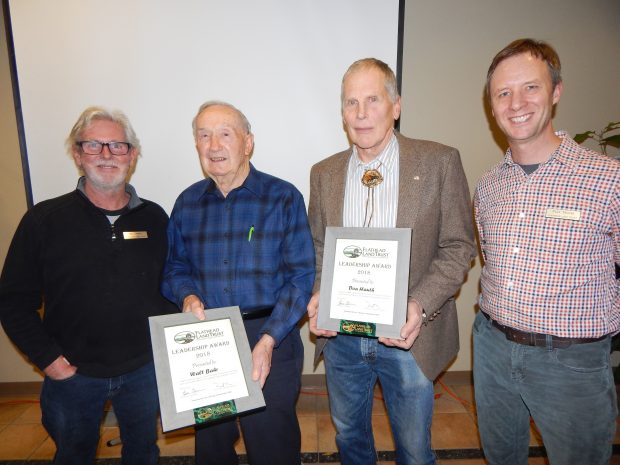 On December 13th at our holiday party and member appreciation celebration, Walt Bahr and Don Hauth were each presented with a Flathead Land Trust Conservation Leadership Award.  The annual award recognizes volunteers, board members, donors, landowners or staff that have gone beyond the call of duty for the benefit of the organization. Whose leadership, vision, support, volunteer service and ability to get things done have made this organization what it is today and has furthered conservation efforts in the Flathead and NW Montana in a significant way.

Both Walt and Don have dedicated many hours towards the conservation efforts of FLT and thus, have helped not only to meet our mission, but have done much to save many of special places in our amazing Flathead landscape for future generations.

Walt Bahr grew up in Bigfork,  graduating from Big Fork high school and attended college at Montana State University in Bozeman.  He spent his entire career in banking for 36 years, starting with the Conrad National Bank which eventually became First Interstate Bank.  Walt retired from First Interstate Bank in 1990 as the Senior Vice President.

Retirement didn’t slow Walt down as be continued being active in the community and spent more time enjoying life in the Flathead.  He joined the “Over the Hill Gang” with his good hiking buddy Ivan O’Neil, spending many days hiking and climbing throughout Glacier National Park.

Walt joined the FLT board in 1989 and served as a board member for more than 8 years. He also served on the lands committee for a time and was an important and respected voice and leader in accomplishing meaningful conservation projects during that time.  About the time he joined the board, he helped accomplish FLT’s very first conservation project in 1988 – the Sowerwine conservation easement.  Alice Sowerwine decided to partner with the brand new land trust to conserve the family’s 157-acre farm on Fennon Slough near the north shore of Flathead Lake.  I’m sure Walt’s leadership helped make that accomplishment possible.  Walt was also part of the original steering committee organized by the Trust for Public Lands in 1984 (along with Lex Blood, Mike Conner, JoAnn Speelman, and many other founders of FLT) where the community decided the Flathead area needed its own local land trust – a decision that created the Flathead Land Trust in 1985.

Walt’s service to the organization didn’t end at the board room as he also spent many hours and days volunteering on FLT’s conservation easement properties (along with Don Hauth), visiting with landowners and monitoring to ensure the conservation protections were being upheld.

Don Hauth grew up in Cleveland, Ohio, at a time when Lake Erie was too polluted to swim in or eat fish from, and the Cuyahoga River often caught fire. As soon as he could, Don left the city. With only $50 in his pocket, Don headed west on a train west to live in a place where he could enjoy the outdoors. He got a seasonal job working for the Forest Service in Idaho and eventually landed a permanent Forest Service job as a Wilderness Ranger in the Bob Marshall Wilderness Complex.  Don finished his career with the Forest Service at Swan Lake Ranger District for the Flathead National Forest.

In 1982, Don purchased 10 acres in the Creston area. He fell in love with the property because of the diverse habitat including a natural spring and the diversity of wildlife it attracted.  Because of his training, Don wanted to apply science-based knowledge on a small scale – managing for old growth, using fire as a management tool, and developing a pond and nesting structures. Don created a management plan for his property, but wanted to ensure it would be preserved and stewarded long after he was gone.  Don had the foresight to place a conservation easement with Flathead Land Trust on his land in 1998, forever protecting the rich wildlife habitat and open space values of his property.

Through his work with the land trust, he identified a real need to be able to provide funding to landowners to pay for the due diligence expenses of a conservation easement. Don did not want costs to keep a landowner from protecting a property with important conservation value. This Fund has helped numerous properties receive protection that otherwise would not have been financially possible.

Don has been a stalwart supporter of private land conservation for so many years and continues to support conservation project efforts.  Through his influential and genuine “love of the land”, Don helped persuade other landowners to also follow his lead in voluntarily conserving their own land.

He and Walt spent countless hours of (as Don says) “windshield time” together as they traveled across the Valley and NW Montana to monitor FLT’s conservation easements each year. In fact, for many years, the organization relied on these two as the only volunteers annually monitoring easements.

We are so grateful to Don and Walt for their unwavering leadership, service and commitment to conserving our spectacular land and water legacy through community-based conservation.

Give a Year End Gift for Conservation – and Double Your Giving Impact!

Posted On November 23, 2015 ~ 0 Comments
Join us for #GivingTuesday on December 1st or any day before the end of the year to Give Back to the Flathead! Here's why your year end…

Posted On December 16, 2019 ~ 0 Comments
Make a Bigger Difference for Conservation this year! Give now through December 31 and make your gift count even more with our Year-End Matching Gift…

Posted On December 14, 2015 ~ 0 Comments
December 14, 2015 - The conservation achievements and leadership of Dr. Lex Blood and Mike Conner were recognized at the FLT holiday party and membership meeting on…